In 2013, JLD Contracting BV entered into collaboration with Antea Group and Wiertsema & Partners. With the support of these partners, JLD Contracting entered into a unique partnership with Waterschap Rivierenland to turn the concept of the JLD dyke stabiliser into an accepted system within the High Water Protection Programme (HWPP). This innovative technique to improve dykes, which aims particularly to improve inward stability, is a design based on an idea patented by Mr Jos F. Karsten, director/owner of JLD Contracting BV, with its registered office in Edam.

Together with the partners, an experimental design was set up with Deltares, who assists the development on behalf of Waterschap Rivierenland, the contracting authority. After extensive soil investigations, multiple calculations and many meetings, the tests were initiated at a location made available by the municipality of Purmerend. One of the basic ideas is that what has already been investigated and deemed useable need not be investigated again. This data, which is often available for the market, will be used optimally within this development. Below we provide insight into the main elements of the system’s operation and the test procedure method.

The preparation phase is ready and the project team has started the first tests. All of the parties involved jointly with Deltares are working on this project with full commitment. This has led to the test design, which allows us to extract all information required to fill the remaining knowledge gaps.

In the field, the top layer of the test dyke is excavated and the dyke body is installed on top of this, reaching a height of approximately 1.40 m. In addition, various monitoring systems are installed, including piezometers and measurement posts. The subsoil and clay for the dyke body are analysed by means of compression tests, single stage triaxial tests and DSS tests. The Atterberg limits as well as the volumetric weight/water content of the dyke material are also determined.

The tests are modelled in Plaxis 2D/3D to monitor the extent to which the stabilisers theoretically contribute to the dyke body’s macro stability and how the test can be best carried out so that the desired slip circle is achieved. On the right: an illustration of the work on the stability analysis for the container test/test dyke. 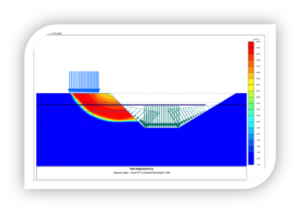 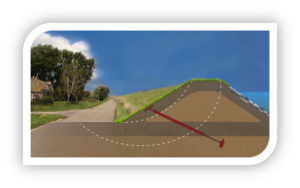 Main objectives of the interaction tests:

Main objective of the container tests:

The entire development is made possible by the new scheme provided by the HWPP.

Within this new scheme, innovative projects are 100%-funded (instead of 90%) and the risks associated with the innovation’s eventual failure are borne by the programme. Naturally, JLD Contracting takes responsibility within this range of risks – this is primarily for execution and materials. The energy, commitment and speed with which the project is conducted prove that the new HWBP approach offers many opportunities that allow SMEs to bring great ideas to life.

In HWBP’s annual Scan, the JLD dyke stabiliser is seen as particularly promising.

JLD Contracting bv and its partners are extremely enthusiastic about the success of this development. The preliminary results of the tests are very satisfying.